Alarming HIV/AIDS pandemic: What should gov’t do?

By: Regel Javines
In: Bioterrorism and Health, Commentary, Current Global Issues, Feature, Law and Governance
Tagged: global HIV/AIDS pandemic, HIV/AIDS according to WHO, HIV/AIDS death, HIV/AIDS in the Philippines, LGBTQI+ and HIV/AIDS
With: 0 Comments
Help us share this article.

(The version of this article was first published on the already defunct Philippine Review blog and republished on Yahoo! Voices)

“Not only is it unethical not to protect these groups; it makes no sense from a health perspective. It hurts us all,” a remark of the United Nations (UN) Secretary-General Ban Ki-moon addressing the lack of human immunodeficiency virus (HIV) services for marginalized groups, including men who have sex with men (MSM) in this global epidemic. [1]

Let me expand and try to draw some points on how this remark becomes paradoxical in the Philippine settings, as follows:

1. The US-based Pew Research Center (READ: US Election media coverage, integrity drops) released a study that showed the Philippines remained as having the majority number of Christians. Ninety-three percent of them eat the entire total population of 93.3 million Filipinos. Not only that, all over Asia, the Philippines is still on top and ranked 5th all over the world. [2]
2. The Philippines is a democratic and a republican state; [3] the 1987 Philippine Constitution acts as the country’s supreme law of the land, whereby all laws passed shall not be inimical to its principles and aspirations upholding a government of laws not of men.

Now, to simply put it this way: Not only is it unethical for the Church (READ: Reviving the death penalty in the Philippines: Does it matter?) and for those men of honor to denounce LBTQI+ perspectives immoral and to curtail the equal protection of the law and abridge the basic human rights.

The alarming HIV/AIDS pandemic and its identity

Throughout the global journey of this alarming HIV/AIDS pandemic, significant, high levels of HIV infection have been found among men who have sex with men (MSM) in many countries. Historically, AIDS was first discovered among self-identified young homosexual men in the United States of America.

Based on Progress Report 2011, an estimated 2.7 million people around the world were newly infected with HIV in 2010. It is alarming that an estimated 390,000 of them were children. [4]

Moreover, despite the diligent implementation of HIV programs and worldwide funding from member states, new HIV infections are significantly rising in the regions of the Middle East and North Africa.

According to the Joint United Nations Programme on Acquired Immune Deficiency Syndrome’s (UNAIDS) Investment Framework, the current annual international funding for HIV programs fell last year. [5] It was estimated to be only 67% of the US$24 billion maximum needed annual fund by 2015 to sustain an effective, comprehensive response to the crisis.

Meanwhile, WHO has been working with member states in optimizing HIV programs such as treatment, prevention, and diagnostics, and finding ways for integration and efficiencies of the said programs.

Progress Report 2011 disclosed that sub-Saharan Africa (comprised of Botswana, Namibia, Rwanda, Swaziland, and Zambia) has nearly 68% of people with HIV all over the world; 59% of it are women. This marks Africa as the capital region of HIV-infected people in the world.

On the other side of the world, Asia has about 4.8 million people with HIV. About 2.3 million of it came from India—the capital region of HIV-infected people around Asia.

In the Philippines, according to bulatlat.com, “On December 2010 alone, 174 new cases [of HIV infections] were reported, representing a 38-percent increase compared to the same month in 2009….”

How does HIV/AIDS become prevalent?

The underlying question behind making this crisis prevalent is based on several factors that may be independent or intertwining with each other such as the aspect of behavioral, biological, or social, and cultural. These aspects are general perspectives in looking into the answers to the question. 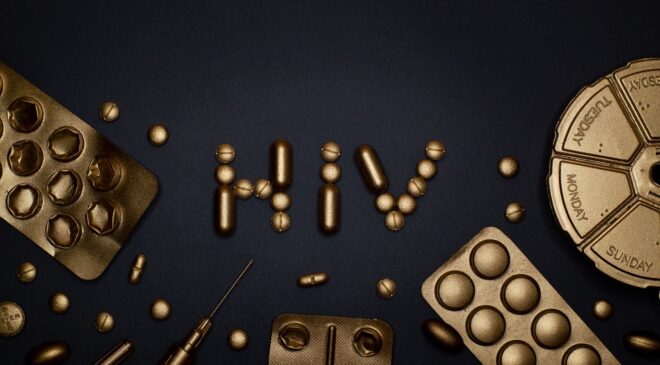 Throughout the global journey of this alarming HIV/AIDS pandemic, significant, high levels of HIV infection have been found among men who have sex with men in many countries. (Photo by Miguel Á. Padriñán from Pexels)

According to HIV, AIDS and Men Who Have Sex with Men article, the above aspects are considered why HIV became prevalent in MSM. [6] The article disclosed that in an incident that an individual (another man) has sexually transmitted infection (STI) and engaged in unprotected sex, this can lead to a biological factor that increases the risk of becoming infected with HIV.

In the behavioral aspect, the article probed that certain behavior increases the risk of becoming infected with HIV. Such behavior describes as having multiple sex partners, not using a condom regularly, taking alcohol or drugs, and being complacent towards safer sex.

In social and cultural aspects, the article insisted that societies or governments that are in denial about MSM, and in the societies where it becomes a taboo subject in their cultures may lead as significant factors contributing to the rise of HIV-infected individuals.

Furthermore, in countries where sex is commercial, transgender or female sex workers may find it difficult to convince their clients to use condoms. This may also increase the risk of becoming infected with HIV.

How can laws mitigate the alarming HIV prevalence?

Studies probed and generally concluded that the rise of HIV infections in a certain region was prevalent in men who have sex with men.

The most alarming was that those MSM in low-income and middle-income countries have sufficient or correct knowledge about HIV. Later on in their life, in the worst case, did only they know that AIDS has already developed.

UNAIDS Executive Director Michael Sidiba during the 2009 forum on “HIV, Human Rights and Men Who Have Sex with Men” remarked that “It remains [an] undeniable fact in all regions of the world, including here in the US, that men who have sex with men lack universal access to HIV services.” [7]

According to the study conducted in the article, HIV, AIDS and Men Who Have Sex with Men, it says, [8]

A major reason for this shortcoming is the fact that many countries have laws banning same-sex relations. A 2009 report revealed that same-sex relations between consenting adults are a criminal offense in 80 countries. In five of these countries (Iran, Mauritania, Saudi Arabia, Sudan, Yemen and parts of Nigeria and Somalia), it is punishable by [the] death penalty.

The study further asserts that [9]

WHO acknowledges the critical role of MSM in the alarming rise of HIV infections globally. In consonance, the World Health Assembly adopted the new Global Health Sector Strategy on HIV/AIDS 2011–2015 with its comprehensive perspectives to eliminating new HIV infections to infants and young people and reducing AIDS-related death by 50%. [10]

Studies documented that the vast majority of new HIV infections result from unprotected heterosexual intercourse and parent-offspring transmission of infection.

However, other studies claimed that the prevalence of HIV infections resulted from the government’s denial and constant Church persecutions in recognizing the legitimacy of LGBTQI+ persons.

Studies further asserted that in this way, LGBTQI+ individuals were forced into hiding themselves and let their vulnerability to that infection remain threatened and uncontrolled.

However, what they did not concur with is the objective basis of research because it cannot be denied that most respondents are either true to themselves or the opposite. No one can assert the veracity of it.

So, how can we justify objectivity to be the dominant factor in determining the right data?

Other proponents assert that it cannot be done unless the government recognizes the imminence of the crisis and the presence of the people infected and those vulnerable to HIV.

Studies cited India’s decision in July 2009 that repealed the law criminalizing homosexuality has seen significant development to improving the country’s provision or funding for HIV programs—treatments, prevention, and care for those infected with HIV. [11]

However, it can be questioned based on the Progress Report 2011 that nearly 49% of all people with HIV in Asia have come from India. [12]

Another one was Kenya, where homosexuality is illegal; HIV prevalence in some areas soared high. [13]

In South Africa, where homosexuality is legal, HIV prevalence in some areas was likely quadrupled in the general population.

Given these premises, the prevalence of HIV/AIDS is dependent on some other factors outside the premise of recognizing the legitimacy of LGBTQI+ persons.

Factors such as biological, behavioral, and social or cultural played a crucial role in either mitigating or aggravating the prevalence of HIV/AIDS infection.

Governments should rather pass laws

Meanwhile, in other perspectives, the government’s cooperation and initiative to pass laws recognizing LGBTQI+ persons is undeniably playing as a mitigating factor through legitimate provisioning of HIV programs.  By doing so, LGBTQI+ persons and HIV-infected individuals into hiding may go out openly without hesitation from persecution and discrimination.

As much as this crisis is as urgent as a global fight, UNAIDS, during Dec. 10, 2011, Human Rights Day, calls for greater leadership to countries in protecting, promoting, and upholding human rights for all people infected with and vulnerable to HIV. [14]

It must be understood that the only way for a society or a country to achieve serious positive developments on this issue of gender equality and the fight for HIV, is to have a state that recognizes first the equality of individuals before the law and before human perceptions and prejudices.

For the Church to understand it better, it must first adhere to the basic Christian teaching of equality of man before the eyes of God and before anyone else. For at the end of the day, who will judge the living and the dead? And in the context of law, who will go above all else before the law? ▲

Regel Javines attempts to understand life and existence through the lens of gnostic spirituality and ontological mathematics. He has been blogging since 2011 writing news, commentary, and opinion about politics, law, and various pressing social issues of interest. Regel is a graduate student at the University of San Carlos taking up an M.A. in Philosophy. View his profile >>>

BUY ME A COFFEE

Tipping me a small amount helps. :)

Philippine Pundit envisions itself as a truly independent, borderless citizen journalism blog publishing facts, information, and commentaries worth noting. Should you find this blog helpful, any help is very much appreciated.

DOH warns PH of COVID-19 alerts for travelers from China

The Gettier Problem Under Cynics’ View

A Critical Look Into Heidegger’s Definition of Philosophy

On Epistemological Argument on Innate Knowledge

Philippine Pundit stands in unity among the rest of the online sources, online citizen journalism platforms, various press or cause-oriented institutions, and the mainstream media to fight against fake news and to uphold the free flow of ideas, opinions, or the freedom of the press.

No work, no pay rule requiring swab tests is foolishness

Copyright © 2011 – 2022 by Philippine Pundit | All rights reserved. | Disclaimer: NOT affiliated with the Philippine government and its any agencies or instrumentalities.

You can find out more about which cookies we are using or switch them off in settings.

Philippine Pundit uses cookies so that it can provide you with the best user experience possible. Cookie information is stored in your browser and performs functions such as recognizing you when you return to this website and helping it to understand which sections of the website you find most interesting and useful. More...

Strictly Necessary Cookie should be enabled at all times so that we can save your preferences for cookie settings.

If you disable this cookie, we will not be able to save your preferences. This means that every time you visit this website you will need to enable or disable cookies again.

Philippine Pundit uses Google Analytics to collect anonymous information such as the number of visitors to the site and the most popular pages.

Please enable Strictly Necessary Cookies first so that we can save your preferences!